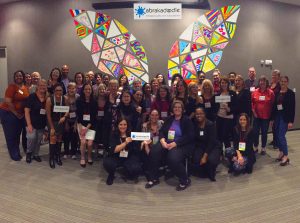 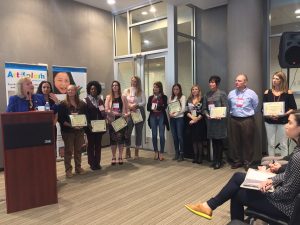 Under the direction of Abrakadoodle’s™ Director of Public Relations Karin Machusic and with the support of our FAC representatives: Dawna Kelly, Eileen Moore, Kim Nubel and Sue Walia, a number of franchise owners stepped up and participated by offering free art classes and events in their communities. Abrakadoodle, in its 11th year of running its Arts for All program, was awarded the Silver Innovation and Impact Award by the IFA. This award recognizes a business whose charitable efforts focused on using creative and innovative ways to maximize the benefits and impact on their community. Our program was selected out of the participants to receive a cash award by the IFA: and that charitable initiative is run by Margaret Cornwell and Susan Parker of Montgomery, AL. It will continue to bring art programming to youth at the Brantwood Children’s Home. Abrakadoodle’s 2017 Community Service Award, recognizing a significant, long-term community outreach project was conferred upon Margaret Cornwell and Susan Parker of Abrakadoodle Montgomery, Alabama. Abrakadoodle’s President and Co-Founder Rosemarie Hartnett spoke directly with Krystal Floyd, the Development Director at Brantwood. According to Ms. Harnett, “Krystal could not say enough about Margaret’s tireless effort over the last few years to ensure the children at Brantwood, who have suffered so much abuse and neglect, continue to receive the joy of taking Abrakadoodle art classes.” Ms. Hartnett also shared, “I think there is something else you should know about Margaret, and it has to do with how all kinds of big dreams can come true. Margaret celebrated her 32nd birthday with me on the night of the IFA award. She shared with me that she started her career with Abrakadoodle as a teacher when she was 21 years old. She dreamed of business ownership, and her dream officially came true this year, as she became an official partner and owner with Susan Parker in the Montgomery franchise.” Abrakadoodle also conferred a Franchising Gives Back Award to the franchise owners who provided remarkable community outreach initiatives in their respective communities during 2017 to include: 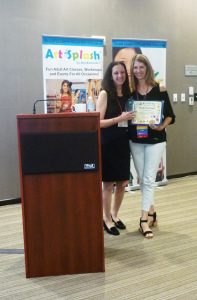 Abrakadoodle’s 2017 Purple Tree Award is a prestigious honor for a franchise owner who not only performs at a very high level, but it also recognizes special effort on the part of the franchise owner to actively promote the Abrakadoodle brand, participate in corporate initiatives and help other owners to grow. Award-winning wildlife artist Mort Solberg, Abrakadoodle’s first Artist of Distinction, inspired the Purple Tree Award, which is named in his honor and signifies our emphasis on creativity and individuality. The winner, Sue Walia of Northern Virginia, had the good fortune to sit next to Abrakadoodle co-founders Rosemarie Hartnett and Mary Rogers at a networking luncheon over 13 years ago. Sue was not looking for a franchise and little did she know that she would soon be the owner of her very own art education franchise. Over the last 13 years, Sue went on to purchase additional territory and to build a very successful business. Her generosity is boundless – whether it’s talking with new candidates trying to learn about Abrakadoodle; participating in company webinars; helping an existing franchise owner; giving back to her community in meaningful ways, or answering a call from headquarters to assist in many different ways. 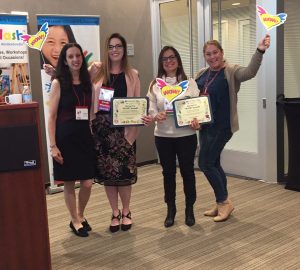 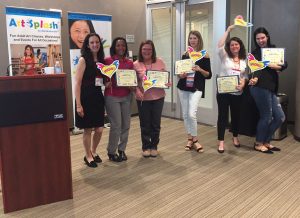 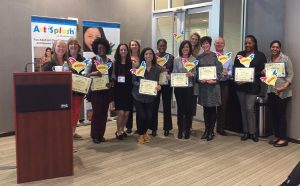 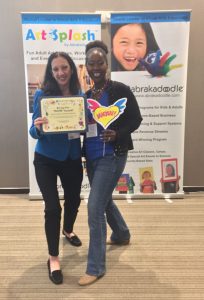 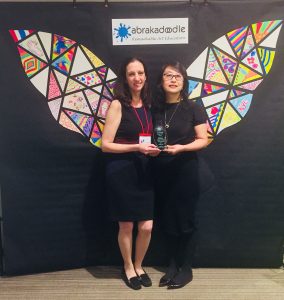 2017 International Purple Tree Award is a prestigious honor recognizing an international program that is performing exceptionally well and actively promotes the Abrakadoodle brand and participates in support of corporate initiatives while helping the program to grow. The winners of the 2017 International Purple Tree Award was conferred upon James Liu and Alice Wang from China. This Master Franchise, which started in 2010, operates Abrakadoodle programs in more than 300 My Gym Centers in 12 cities and operates 50 standalone studios (up 30 from last year!). From Beijing to Guangzhou- from Tianjin to Shanghai, from Shenyang to Xi’an, they bring the Abrakadoodle program to more than 200,000 children. 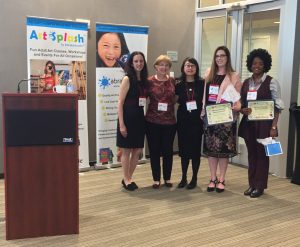 Abrakadoodle conferred 10-Year Awards, recognizing two very important franchise owners who have celebrated a remarkable milestone with Abrakadoodle by renewing their Franchise Agreements. They continue to make our dreams come true of building great businesses and businesses that people love in the communities they serve. Congratulations to Dawna and Al Kelly of Wayne County and Detroit, Michigan, as well as Susan Parker and Margaret Cornwell of Montgomery, Alabama. 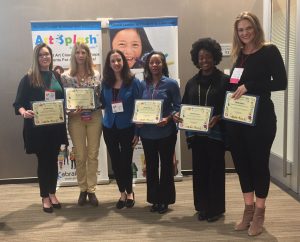 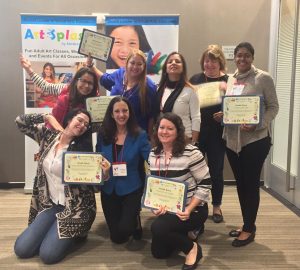 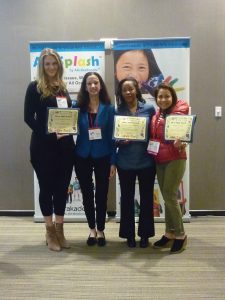 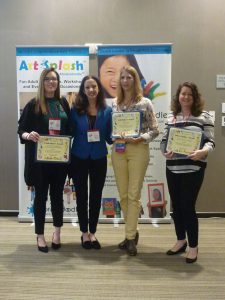 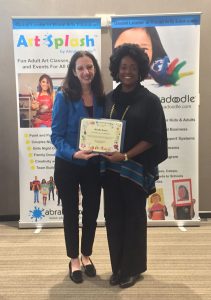 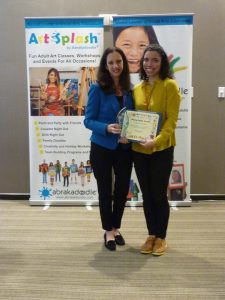 Abrakadoodle presented the 2017 Rising Splat Award to Carrie Turner of Savannah, GA for her impressive and fast start in launching her new franchise location in Savannah. Â Carrie is an accomplished artist in her own right with a distinguished background in teaching children art in New York City under a prestigious grant. She is a tireless advocate for art education and the Abrakadoodle brand. 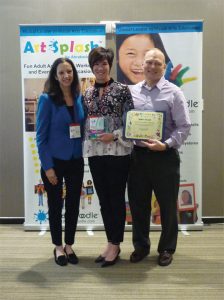 Eileen & Troy Moore of Woodbridge, VA were awarded Abrakadoodle’s 2017 Splat Award for their creative promotion of the Abrakadoodle brand and for their savvy use of social media, especially on Facebook to engage and entertain their customers with creative and inspirational photographs and meaningful story lines. The Moore’s received five awards during conference for their leadership, performance, service and creativity. 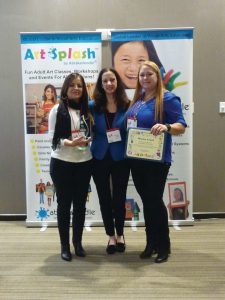 Juliana Kenj and Maria Buiatti of Katy and West Houston, TX were honored with the 2017 Mentor Award for exemplifying what it means to be a mentor to franchise owners. They only joined Abrakadoodle by acquiring a resale opportunity in April of 2017 and in that short time have helped to advise other franchise owners in many supportive ways, as well as sharing business opportunities with neighboring locations. Despite the Houston floods, this dynamic duo embrace the Abrakadoodle brand with such passion that they inspired a group of friends to purchase an Abrakadoodle territory nearby. 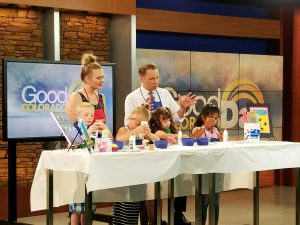 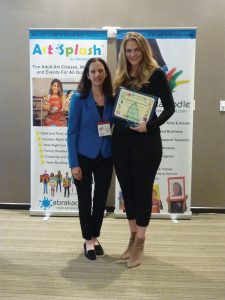 Abrakadoodle’s 2017 Abrakadoodle in the Media Award was conferred upon Barbara and Steven Gray of Metro Denver, CO, for obtaining positive broadcast coverage that greatly increased brand awareness in June of this year. The owner’s lead teacher Kati Bohall-Jacob served as the talent, handling on-camera teaching and an interview, while Barb and Steven captured photos of the live broadcast segment. The finished segment was shared on social media, extending viewership and providing awareness about Abrakadoodle’s popular camp programs. 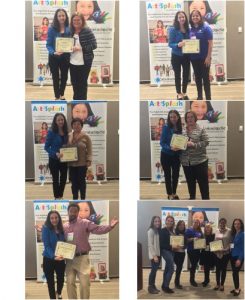 Abrakadoodle conferred additional awards, including: 2017 Jackrabbit Award to Marianne Daley of Howard County, MD for embracing, learning and implementing this business tool with great enthusiasm and solid business benefits. The 2017 Art with Heart Award to Miggy Ortiz of Queens, NY, for performing high quality afterschool programming to benefit children in her community. Her enthusiasm for Abrakadoodle’s curriculum and the benefits she knows art education brings to children, Miggy has forged new relationships and building her business with faith-based schools. 2017 Perseverance Award to Eric Rodrigues of Gainesville, GA for his hard work in cultivating a relationship that helped expand his business to bring Abrakadoodle art classes to girl scouts completing badge requirements. 2017 Braveheart Award to Ruth Yong of Fremont, CA for building a solid team as she strives to expand her business. Providing comprehensive training is important to this owner as she works to create a team that allows for individual strengths to shine. 2017 Powerful Planner Award to Michelle de Beus of Charlotte, NC for integrating her operations experience from her previous career to develop and implement a working business development plan. 2017 Poised for Growth Award to Eric Cohn of San Antonio, TX, who brings the discipline of a retired Army veteran to approach his daily business routine and combines it with boundless enthusiasm and a real interest in the people he meets, which has led to an impressive contract for an academic art program and will no doubt lead to more excellent business opportunities. 2017 Braveheart Award to Juliana Kenj & Maria Buiatti of Katy & West Houston; Romina Moscoso, Julieta de Cara & Dana Yannone of West Greater Houston, as well as Charla Stuart of Greater Metro Houston, for overcoming significant personal and professional hurdles as a result of Hurricane Harvey, which led to widespread floods and devastation and affected all of our Houston franchisees personally and professionally. All of these owners have shown grace in the aftermath and joined the annual conference with a strong and hopeful outlook. 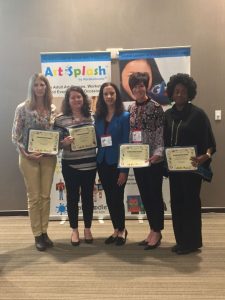 Last but not least, Abrakadoodle values the leadership and contributions of its Franchise Advisory Council, which helps to guide the franchise system and work with corporate headquarters on key initiatives. For their dedication in building the Abrakadoodle Dream, the 2017 FAC Awards go to the following individuals. Chairperson: Sue Walia of Northern Virginia; West/Central Representative and Vice Chairperson Dawna Kelly of Detroit, MI. Southeast FAC Rep: Kim Nubel of Metro Atlanta, Georgia and East Coast Rep: Eileen Moore of Prince William, VA.

We are proud of team Abrakadoodle and look forward to our work together to make our dreams for a brighter, more colorful and creative future possible!