Abrakadoodle is pleased to recognize Susan Parker and Margaret Cornwell of Montgomery, Alabama, who are celebrating 10 years with Abrakadoodle this summer and just renewed their commitment to their award-winning franchise. Margaret Cornwell, formerly teacher/manager, joined Susan as a co-owner in 2016 in operating a franchise that consistently performs at a very high level and is marked by their commitment to service excellence.

Rosemarie Hartnett, President and Co-Founder of Abrakadoodle, said, “We are thrilled to have Susan and Margaret renew their Abrakadoodle franchise agreement after 10 years. We know this passionate and enthusiastic team will continue to expand programming within their territory and bring the best in art education to their community! They are an inspiration to our franchise system!”

Abrakadoodle of Montgomery serves Greater Montgomery including Prattville and Wetumpka. Susan and Margaret are leaders in the Abrakadoodle franchise system, bringing fine arts, standards-based programming directly to public and private schools. They also offer a wide array of programs ranging from preschool classes and elementary after-school programs to themed camps, arty parties, professional face painting and so much more. According to Margaret Cornwell, their community outreach in support of the Brantwood Children’s Home was “enormously rewarding.” 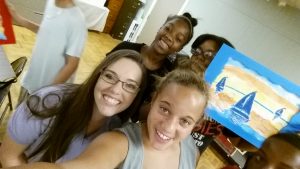 “I have always known I wanted to teach art,” remarked Margaret. “I started teaching with Abrakadoodle in 2007 and instantly knew this was the career for me! In 2007, I was asked where I see myself in 10 years, and I said ‘Abrakadoodle.’ Ten years later, here I am. If you asked me the same question today, I would answer the same way. Montgomery is my hometown, and I care deeply about being a part of enriching its art culture and community. I am honored to have served more than 10,000 students in my hometown, helping children develop essential skills while discovering the fun of making unique art. Abrakadoodle builds a stronger, more competitive generation of inspired problem solvers.” Ms. Cornwell revealed that she hopes to expand their program in the coming years by identifying more ways to provide accessible, affordable, high quality art education to more of Alabama’s students and future creatives. I want to introduce the love of art, the confidence of creativity and the reward of innovation,” Margaret said. 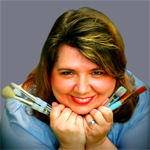 According to Susan Parker, “The past 10 years has been enriching, fulfilling and rewarding. The ability to bring art to children and adults and to watch their creativity and confidence grow is such an honor.” Ms. Parker continued, “I am excited to have Margaret as a business partner at this 10-year renewal celebration, and I look forward to supporting her as my successor.” 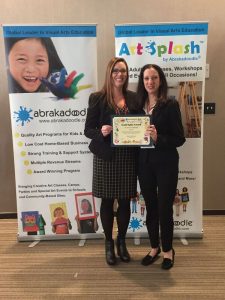 Abrakadoodle of Montgomery has been honored with the Media Award (2011) for increasing brand exposure using social media and for a high-quality interview resulting in a print placement; Community Service Award (2013) for delivering free weekly classes for children with developmental disabilities including autism and for taking part in numerous community events; Arts for All Grant (2014, 2016) to fund a series of in-school art field trips to benefit youth at the Brantwood Children’s Home for abused, neglected and at-risk children; WOW Awards for outstanding customer reviews (numerous years); Silver Splat performance award (2011, 2013); Gold and Gold Splat and a Half Awards (2014, 2016); Doodle Dozen Award (2014, 2016), as well as the Franchise Advisory Council (FAC) Award for Susan’s representation of the Southeast Region (2012, 2013).