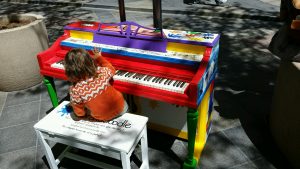 “Your Keys to the City” art event captures the attention of this child who enjoys playing and exploring the arty Abrakadoodle piano!

Art in the great outdoors is a wonderful way to make art accessible to the public, and kudos to Steven and Barbara Gray of Abrakadoodle North and West Denver, their teacher/manager Kati Bohall-Jacob and art teachers Robin Ringrose and Chana Abrahams for volunteering their time and materials to participate in a special piano painting project. Abrakadoodle locations nationwide have been identifying special ways to give back in their respective communities as part of the company’s 2017 Arts for All Campaign. 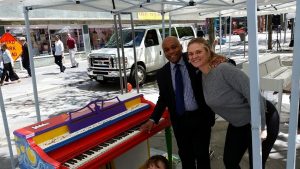 “Your Keys to the City” is a form of street-art produced by the Downtown Denver Partnership and sponsored by the Downtown Denver Business Improvement District, and the live painting event took place on May 1st, 2017 at the 16th Street Mall between California and Welton. Katie Toney, the event coordinator reportedly said that they had numerous submissions and only selected 10 piano artists to show off their creative abilities. Barb Gray said that Abrakadoodle’s submission was entitled, “Zen Artists” and was inspired by a wall hanging that has different patchwork-type designs on a dragon that hangs in their office. Painters from Abrakadoodle Denver included Steven and Barb, Kati Bohall-Jacob and art teachers Robin Ringrose and Chana Abrahams. According to Steven Gray, “We were very honored by this selection, and we were quite gratified to receive so many compliments on our whimsical piano art.” 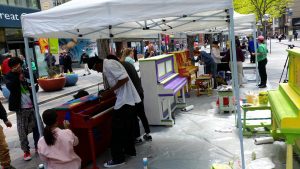 A unique city project, all of the pianos are functioning and will be viewed by thousands of people every day as they walk along the popular pedestrian-friendly area between now and September 30th. To further engage children and the public in its arty piano presentation, Abrakadoodle is hosting a contest, “How Many Artists’ Styles Can You Identify?’ to name all of the artists featured on the piano. Barb remarked, “Having people guess the artist by identifying their technique and style honors our philosophy that art is for everybody and that we can always learn from our surroundings. We are hoping people will linger, relax and have fun figuring out the artists represented on our piano.” One lucky winner will receive a free Abrakadoodle Arty Party! Barb commented, “Your Keys to the City has been a rewarding project for Abrakadoodle to celebrate the arts with colorful, creative art on working pianos and to increase visibility for the arts in our community.”