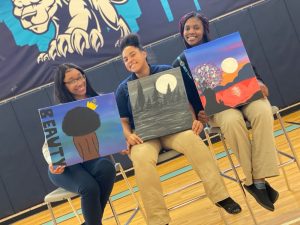 Voyageur AP Abrakadoodle art students show off their winning art creations, which were used as inspiration for this year’s event.

Forging community engagement with schools is a goal of many and was well-exemplified once again as a result of a strong partnership between Abrakadoodle Detroit and the Voyageur School District. Advanced Placement (AP) Voyageur College Prep High School students competed in an Abrakadoodle art contest, and art by the top three winners were used as inspiration pieces during the paint night event. 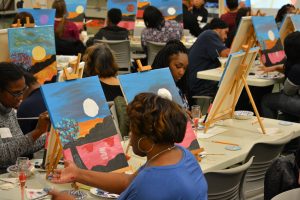 According to Dawna Kelly, Program Director/Owner of Abrakadoodle Detroit, “Painting with Parents in the Voyageur School District was another successful event!”  In its 4th consecutive year hosted by Voyageur College Prep High School, this much-anticipated event was held on Thursday, November 21st, with approximately 80 parents and board members gathered to celebrate quality education and creative expression. 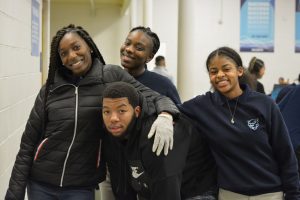 AP student servers enjoyed giving back to the school community that supports them.

Voyageur Academy is a free, public charter school serving students grades K-12 and is located at 4321 Military Street in Detroit, Michigan. Abrakadoodle’s school partnership programs bring art together with academics during the school day, providing standards-based visual arts education that is culturally rich and integrates art into core subject matter to deepen learning. We salute Dawna and Al Kelly of Abrakadoodle Detroit and their dedicated teachers for enlivening their community with art and for taking a leading role in giving back to the school community they serve! 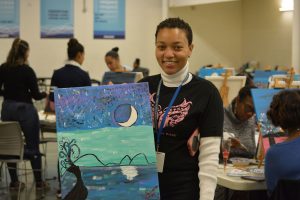 Painting with Parents event brought together the Voyageur school community with great results!