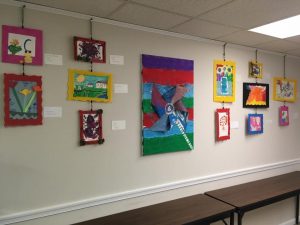 As part of Abrakadoodle’s 2017 Arts for All Campaign, Sue Walia, Owner/Director of Abrakadoodle of Northern Virginia partnered with CASA (Court Appointed Special Advocates) in Fairfax County to host a children’s art show with a goal of creating a cheerier, child-centered office space for the advocates charged with helping children. April is Child Abuse Prevention Month, which is ideal timing to bring attention and celebrate the work of CASA. Abrakadoodle committed to conducting a special event and to donate the created art to decorate the CASA offices for long-lasting, positive impact. 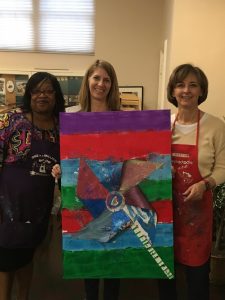 On Thursday, April 13th Abrakadoodle conducted a FREE group painting workshop at “Dinner with Friends,” which was hosted by Doorways for Women and Children, an organization that provides shelter and other support for victims of abuse. Abrakadoodle’s Owner/Director Sue Walia with her teachers Marina Troy and Patricia Scott volunteered their time to guide a group of approximately 20 children in creating a ‘pinwheel collage’ on a large canvas. The pinwheel is the national symbol for child abuse prevention. It is a reflection of hope, health and safety and serves as a reminder of happy, healthy childhood experiences that we want for all children. The Doorways organization is very familiar with the work CASA performs and was excited for the children they serve to take part.

Rosemarie Hartnett, President and Co-founder of Abrakadoodle with Sue Walia and members of the CASA team Emily and Shaina.

The reception for Abrakadoodle’s Art Show at CASA took place on Thursday, April 20th and was attended by two student artists and their families, as well as Emily, Supervisor, and Shaina of CASA, as well as Abrakadoodle corporate staff Rosemarie Hartnett, Co-Founder and President and Jennifer Weir, Franchise Support and Training Associate and Abrakadoodle of Northern Virginia’s Sue Walia with her Master Instructor Diane Atwood. Sue said, “It is an honor to be part of raising awareness and to bring bright and whimsical art to the CASA office.” A number of Abrakadoodle of Northern Virginia’s teachers collected art to donate for the decoration of the CASA offices. Sue, along with her teachers Nancy Brannegan and Marina Troy, contributed their time and talent to hang artwork for the show at CASA. Child advocates receive their training at the CASA offices, and the goal of this activity was to provide ongoing inspiration with children’s art to help promote and represent the best interests of children served by this organization.

Abrakadoodle of Prince William County Launches Arts for All

Abrakadoodle of Montgomery, AL Launches Arts for All Programs