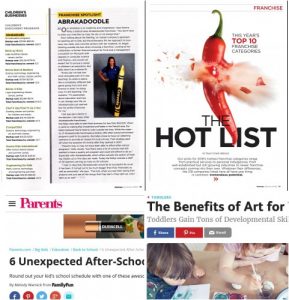 Abrakadoodle is closing 2016 with two additional key media placements, signaling that the art education company is on a very positive track – both in terms of its community impact and business success. Black Enterprise Magazine published an article on December 7, 2016, “Dawna Kelly is Making Magic with Her Abrakadoodle Franchise – How these franchise owners are using their business to enhance and improve the Detroit school systems by making children’s art accessible to the community.” The article (http://www.blackenterprise.com/small-business/franchises/dawna-kelly-abrakadoodle-franchise/), written by Nancy Williams, features an interview with Abrakadoodle’s top performer in the United States. According to Dawna Kelly: “I had no idea that Abrakadoodle would be as successful for us as it had been. It turned out to be much bigger than that, financially as well as personally,” she (Dawna) says. “The kids, when you see them doing their projects and you see all the things that they learn – they light up. And I light up as well.” Franchise publication 1851 Magazine named Abrakadoodle in an article on December 6, 2016: “Education Franchises to Watch in 2017 – Here are the top 25 education franchises to keep an eye on in 2017” by Lydia Heerwagen (http://1851franchise.com/details/8292/Education-Franchises-to-Watch-in-2017#sthash.SlBBMKzk.gbpl). These media placements follow a series of placements, starting with the cover article for Franchise Update Magazine on February 7, 2016 entitled “Fabulous Female Founders” by Kerry Pipes and featuring a two-page article about Abrakadoodle co-founders Mary Rogers and Rosemarie Hartnett (https://www.joomag.com/magazine/franchise-update-magazine-issue-i-2016/0561727001456182900?page=12), “Art Appreciation: sharing a passion for teaching, kids and art.” Parents Magazine/The Parenting Channel on About.com published an article on February 28, 2016 by Louisa Fitzgerald, “The Benefit of Art for Toddlers: Toddlers Gain Tons of Developmental Skills from Art,” which featured an interview with Abrakadoodle’s Director of Public Relations Karin Machusic, talking about the benefit of art for toddlers and how to get started with this great activity for young children (https://www.verywell.com/the-benefits-of-art-for-toddlers-3954729).  Entrepreneur Start-ups (Spring 2016) included Abrakadoodle in “THE HOT LIST: This Year’s Top 10 Franchise Categories” by Tracy Stapp Herold (https://www.entrepreneur.com/article/285119), and Entrepreneur Start-ups re-published an article spotlighting successful franchisee Dawna Kelly of Abrakadoodle-Detroit (Summer 2016). Family Fun Magazine published an article entitled, “6 Unexpected After School Activities,” which featured an interview with Dawna Kelly of Abrakadoodle-Detroit and one of her cartooning students. (http://www.parents.com/kids/education/back-to-school/unexpected-after-school-activities/.)

“Abrakadoodle is full steam ahead with developing curriculum to help students build skills that will make them become more globally competitive and college/career ready,” remarked Rosemarie Hartnett, President and Co-founder of Abrakadoodle. “I find it very gratifying to see the media recognition Abrakadoodle has garnered within the educational franchise industry,” Ms. Hartnett continued.