Franchise Direct ranks “stand out” franchises that have expanded internationally 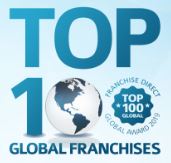 Sterling, VA, March 15, 2019 – Abrakadoodle, a global leader in creative art education, has been named to the Franchise Direct list for Top 100 Global Franchises for 2019.

“We are thrilled to be named to this impressive global franchise ranking,” said Rosemarie Hartnett, co-founder and President of Abrakadoodle. “Our global success is in part a reflection of how our creative art education programs are valued around the world, as well as Abrakadoodle’s scalable franchise model.” Abrakadoodle has a strong and growing presence in China, which brings art education to more than 200,000 children. Abrakadoodle is also thriving in Singapore and has most recently launched in Mexico and Australia.

According to Franchise Direct, “The franchises that comprise the Top 100 Global Franchises stand out from thousands of franchises that have invested in international expansion strategies.” Franchise Direct reports that all of the Top 100 Global Franchises “share the keys to business success an any level including: a well-defined business identity, a clear business plan, a commitment to training and support, sensitivity to environmental issues, and the ability to innovate to keep pace with ever-changing social and economic conditions.” The criteria for this Top Global Franchises include: system size based upon number of units; sales revenue for the system; stability and growth; number of years in operation; number of countries operated in, as well as other considerations, such as financial assistance provided to franchisees; presence of an environmental policy and corporate citizenship.

Since 2002, Abrakadoodle has been the leading provider of art classes, camps, parties and art events serving well over one-million children around the world. Abrakadoodle’s Art Splash program also brings fun art events to adults. Providing these multiple programs, our owners become the “go to” brand for all things arts and creativity related – for both children and adults – all in one franchise offering.