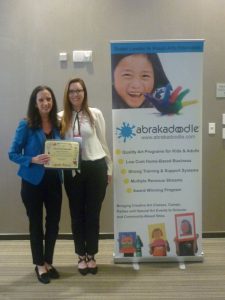 Rosemarie Hartnett, President of Abrakadoodle presents Arts for All Award to Margaret Cornwell.

Abrakadoodle’s 2016 Arts for All Scholarship, which funds programs that benefit children at locations that would otherwise not be able to offer Abrakadoodle programs, was conferred upon Margaret Cornwell and Susan Parker of Abrakadoodle – Montgomery, Alabama.  As recipients of his award in 2014, Abrakadoodle of Montgomery, Alabama will be returning with beneficial art programming for youth who have suffered abuse and neglect at the Brantwood Children’s Home. These young people have typically not been enriched with art for years, if ever. Art offers a wonderful means of self-expression and an outlet for the imagination, in addition to building skills that result in increased confidence and joy. 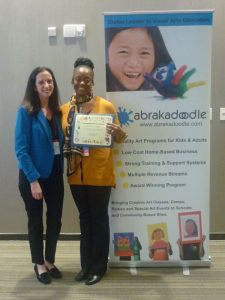 Abrakadoodle’s 2016 Community Service Award recognized a significant, year-long partnership project between Al and Dawna Kelly of Abrakadoodle of Metro Detroit and the Plymouth Canton Community Schools District, which brought together 100 students representing the P-CCS Student Leadership Council for a very special project to benefit area homeless families. The students worked with Dawna Kelly during the fall of 2015 and chose a creative painting activity to launch a service project to help bring attention and hope to homeless families in the community. According to Nick Brandon, P-CCS Director of Communication, “Thanks to the partnership, Michigan artist Natasha Wescoat and other Abrakadoodle teachers led groups of students in the creation of three special works of art. This project blends community service with a fun, memorable culmination of the leadership work of some of the brightest stars within the P-CCS student body.” Following the highly creative painting workshop that Abrakadoodle hosted, finished student canvases were auctioned and thousands of dollars were donated to benefit St. Vincent de Paul’s Journey to Housing program. 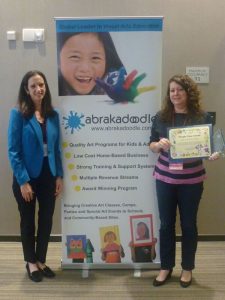 Abrakadoodle’s 2016 Purple Tree Award is a prestigious honor for a franchise owner who not only performs at a very high level, but it also recognizes special effort on the part of the franchise owner to actively promote the Abrakadoodle brand, participate in corporate initiatives and help other owners to grow. Award-winning wildlife artist Mort Solberg, Abrakadoodle’s first Artist of Distinction, inspired the Purple Tree Award, which is named in his honor and signifies our emphasis on creativity and individuality. The winner, Kim Nubel of Atlanta, Georgia, has worked tirelessly to elevate the Abrakadoodle brand in her community. She has been a tremendous supporter of such company initiatives as the Marketing Task Force, which provides support and assistance via ongoing webinars for franchise owners throughout the year. Kim’s participation and leadership have had the effect of unifying our franchise system and has directly helped individual franchisees to growth their respective programs. 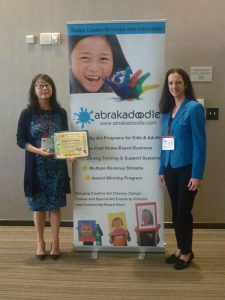 2016 International Purple Tree Award is a prestigious honor recognizing an international program that is performing exceptionally well and actively promotes the Abrakadoodle brand and participates in support of corporate initiatives while helping the program to grow. The winners of the 2016 International Purple Tree Award was conferred upon James Liu and Alice Wang from China. This Master Franchise, which started in 2010, operates Abrakadoodle programs in more than 250 My Gym Centers in 12 cities and operates 20 standalone studios with six opening soon. From Beijing to Guangzhou- from Shanghai to Chengdu, from Xian to Hunan, they bring the Abrakadoodle program to approximately 100,000 children. 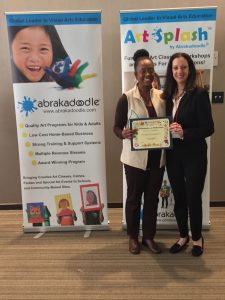 Abrakadoodle’s 2016 Abrakadoodle in the Media Award was conferred Al and Dawna Kelly of Metro Detroit, who invested time and energy throughout the year to help the Abrakadoodle brand to shine in a repeat “Media Star” performance this year. Separate of their impressive charter and private school integrated programs that culminate with a large art show every year, this dynamic duo got involved with their local public school district in a meaningful way. They took part in a year-long initiative that entailed working with student leadership council members from throughout the district to take part in a customized art workshop that culminated with finished creations that were auctioned to benefit an area program for homeless families. The Kelly’s participated in a feature article about their community service project in the Hometown Life section of their newspaper. Last year, Dawna Kelly began working with the special features editor of Entrepreneur Magazine starting in May and concluding with a fabulous article placed in the August 2015 issue. The magazine contacted her this year to re-publish the article! Additionally, Dawna recruited one of her art student’s to take part with her in an article about afterschool programs in the popular Family Fun Magazine, which was published this September. They are just the big highlights that have helped to greatly increase awareness about the Abrakadoodle program. 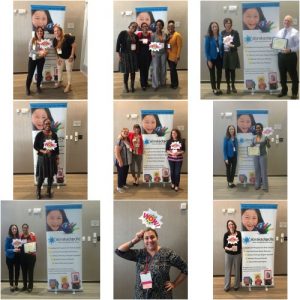 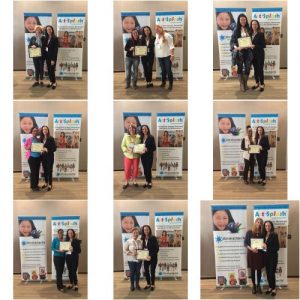 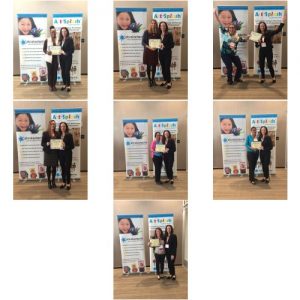 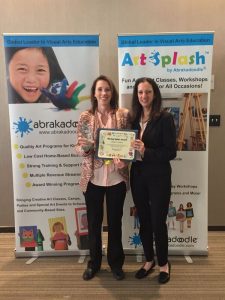 Abrakadoodle presented the 2016 Rising Splat Award to Shelly Reed of Allen, TX for her impressive and fast start in launching her new franchise location in North Texas. 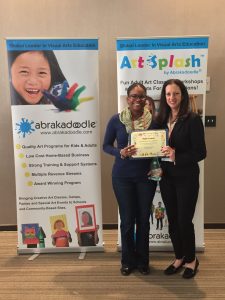 Ceneetra Anderson of Cincinnati, Ohio was awarded Abrakadoodle’s 2016 Splat Award for her creative promotion of the Abrakadoodle brand and for combining traditional customer service with a savvy use of social media to create a splash in her market. In her short time in business, Ceneetra has earned the respect of key sites with whom she’s formed strong partnerships. 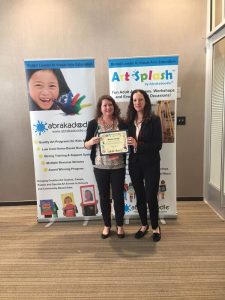 Kim Nubel of Atlanta, Georgia was honored with Abrakadoodle’s 2016 Mentor Award for serving as an example of success in her nearly perfect record of participation in Abrakadoodle webinars and Marketing Task Force initiatives in which she has acted as both a strong contributor and an enthusiastic collaborator. Kim takes time to share best practices for business with her franchisee colleagues, and she brings creativity, enthusiasm and a strong business acumen to every interaction. Kim’s mentorship has helps her peers to grow their respective businesses. 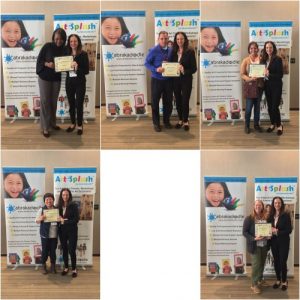 Abrakadoodle conferred additional awards, including: 2016 Art with Heart Award to Cecilia Hazelton of Bowie and Annapolis, MD, who continually demonstrates her love for the curriculum and how it can positively impact kids. 2016 Braveheart Award to Ruth Yong of Fremont, CA for overcoming a number of personal and professional hurdles with positivity and a commitment to enriching lives through her Abrakadoodle art programs. 2016 Dedication Award to Maria Gonzalez of Miami, FL for her tenacity and patience in working through programming obstacles. 2016 Perseverance Award to Miggy Ortiz of Queens, NY who is looking beyond business obstacles by recommitting to serving her market. 2016 Pioneer Award to Eric and Jamie Rodrigues, who as Army veterans are deploying strategies that play on each of their strengths to build key sites in their territory. 2016 Powerful Planner Award to Pat Schon of Raleigh, NC. Pat has been using her strong business skills, including spread sheet prowess, to develop a business plan that is certain to help her succeed. 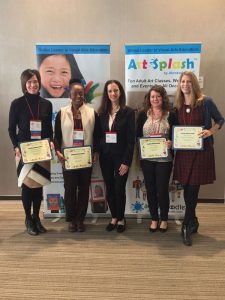 Last but not least, Abrakadoodle values the leadership and contributions of its Franchise Advisory Council, which helps to guide the franchise system and work with corporate headquarters on key initiatives. For their dedication to Abrakadoodle, the 2016 FAC Awards go to the following individuals. Incoming Chairperson: Sue Walia of Northern Virginia; West/Central Representative and Vice Chairperson Dawna Kelly of Detroit, MI. Southeast FAC Rep: Kim Nubel of Metro Atlanta, Georgia and East Coast Rep: Eileen Moore of Prince William, VA.

We are proud of team Abrakadoodle!