Animals in Art: Kids Love Them 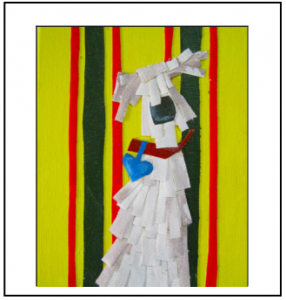 A canvas dog collage by Robin Cooper makes use of unique art materials.

Kids love animals, and so it only stands to reason that they also appreciate viewing and creating their own animals in art. Throughout history, artists have always created drawings, paintings and sculptures of animals. Cave art reveals ancient paintings that date back tens of thousands of years in which animals are portrayed. Ancient Egyptian artists often depicted gods with the heads of animals. Tribal art generally features a combination of animal and human characteristics that seem to symbolize man’s bond with his natural environment. Mythical beasts of the Middle Ages decorated medieval manuscripts with creatures that sometimes took on secret symbolic associations. Art of the 17th Century featured hunting scenes with dramatic life and death struggles, while 18th Century artists celebrated the natural beauty and majesty of animals in their natural habitats. Victorian artists of the 19th Century painted sentimental pieces of their domestic pets and livestock, while artists in the 20th Century explored a wide range of animal genres and invented some, as well. As we get underway with the 21st Century, we see wonderfully diverse animal artisans.

Abrakadoodle features a number of talented contemporary and classic artists who inspire students with their animal creations. Mort Solberg is a wildlife painter and an Abrakadoodle Artist of Distinction. Children love to create art in his style that  incorporates the use of a large paint brush to create art that combines realism with abstract images. Mort brings his love of nature and the outdoors into his award-winning art, and he wants to foster that appreciation in children.

Contemporary artist Sophie Harding enchants kids everywhere with her adorable animal creations fashioned in a Naïve Art style that feature simple shapes and vivid colors. Born in England, Sophie received a diploma in General Art and Design, followed by a bachelor’s degree in Fashion and Textiles at Central St. Martins. Her training has motivated her to use many different types of artistic media in her work. In addition to Naïve Art and fine art prints, Sophie is a successful illustrator of children’s books and magazines, greeting cards, gift wrap, calendars, tableware and textile designs.

Upon discovering the unique works of Robin Anne Cooper of South Carolina just a couple of years ago, Abrakadoodle commissioned her work for holiday gifts. Robin created 52 unique canvas collages featuring Abrakadoodle’s arty dog mascot Splat. Robin uses a unique style of canvas collage in which she paints, cuts up and then produces a new piece featuring such whimsical subjects as cats and dogs. Robin Anne Cooper believes in creating original, affordable art. “Kids so often associate art with well known artists of the past like Picasso and Rembrandt,” commented Abrakadoodle’s co-founder and CEO Mary Rogers, adding, “Abrakadoodle features these classic artists, as well as some of today’s working artists like Robin Anne Cooper, who create amazing artwork that inspires kids to be creative and to see how real people incorporate art into their lives and their work.”