Korky Paul was born in Harare, Zimbabwe into a family of seven children. From an early age he was reading comic books and scribbling cartoons. In 1976 he moved to Europe where he started his career as a children’s book illustrator.
The first book Korky illustrated was Winnie the Witch. It won the Children’s Book Award in 1987 and has been published in over 10 languages. Korky has since illustrated more very successful books for Oxford, Random House, Penguin and many other publishers. He lives in Oxford, Britain and he is very popular among young children who read his books.

What Kids Can Learn From Korky Paul 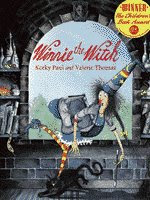 With Korky Paul children will learn about book illustration. They will learn about creating characters based upon a favorite poem or fairy tale. They will be using unusual shapes, lines and color to give the character their own special style. Also, they can learn about sceneries and even create silly stories.

Korky Paul invites children to be carried away into a fantasy world by his illustrations. Some of his characters are witches, dinosaurs and pirates. Younger children can use pre cut up fun shapes, such as big clawed feet, a small head, a big-tummy torso, pointed ears, tiny arms, etc., and they can piece together a character collage of his or her own imagination and add some color, eyes, teeth, and more.

Learn more about Korky Paul on the web at

And read an interview with Korky Paul on helping children develop their own creativity: