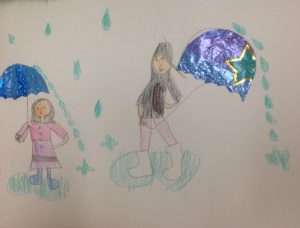 A student from Abrakadoodle Art Northern Virginia produced her own version of “Umbrellas” inspired by Renoir.

In the 1870’s and 1880’s, a group of Paris-based artists began exploring art that incorporated their senses and feelings. The art movement of Impressionism sprang forth, although much to the chagrin of art critics who did not embrace the departure from traditional art styles. In fact, the name of the style in part derives from the title of a Claude Monet work, Impression, Sunrise. Impressionist artists often captured their realistic scenes of modern life by painting outdoors, which is also know as en plein air or in the open air.

Try Impressionism at home! Encourage your child to take a sketchpad outside. Talk to your child about what she sees. Where is the sun in the sky? Are there clouds above? How blue is the sky? What in your child’s surroundings catches her eye? Provide paint, crayons or markers, so that your child can capture the scene. Ask your child to describe her feelings about what she is viewing, because these impressions may drive her to add color or highlight an element of the picture she has in mind. Have fun with the process of using feelings and enjoying the outdoors to inspire your child’s art!