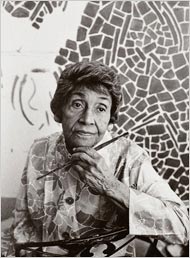 Her artwork (“Sky Light”) graces the Obama’s private residence in the White House. She was the first student to graduate with a B.S. in Fine Arts from Howard University. She was the first African American to have a solo exhibition at the Whitney Museum, and critics raved! A teacher and community arts developer, this lady impacted lives in a positive way. She shows us that the creative journey is limitless.

Alma Woodsey Thomas is a truly distinctive artist featured in Abrakadoodle’s creative art program for children. Born September 22, 1891, Alma showed her interest in the arts at a young age, making puppets and sculpture creations. She was a lifelong learner and educator and what you might call a late bloomer, evolving into an Expressionist painter.

Alma’s family moved her from Georgia to Washington, D.C. in 1906 due to the racial turmoil in Georgia, as well as the well-respected (though then segregated) public school system available in the nation’s capitol. Alma graduated from high school and then studied kindergarten education and became a teacher. Some years passed and in 1921, she entered Howard University and became the first graduate with a B.S. in Fine Arts in 1924. Alma went on to teach at the junior high level and started a community arts program that encouraged student appreciation of fine art. In 1934, Alma earned her Masters in Art Education from Columbia University, and she also studied painting for nearly a decade at American University. She traveled to art centers in Western Europe and after retiring in 1960, she dedicated herself to painting in the kitchen of her childhood home in D.C. She was 69 years young! Alma’s passion for education and her happy, colorful artwork inspire us all, and Abrakadoodle salutes her contribution to creativity and the arts!

According to a 2009 article, White House Art: Colors from a World of Black and White, from the New York Times, “Her art was accessible. Her abstraction was never really abstract; you could always see the nature in it: flowers, wind. Her paintings were modern but part of some older tradition too, as close to quilts as to Matisse. In a racially charged era, her art wasn’t political, or at least not overtly so. Instead of talking anger, she talked color: ‘Through color I have sought to concentrate on beauty and happiness, rather than on man’s inhumanity to man.’

Alma Thomas was the first African American woman to have a solor exhibition at the Whitney Museum of American Art, and that same year, her work was also shown at the Corcoran Gallery of Art.

“Creativity art is for all time and is therefore independent of time. It is of all ages, of every land, and if by this we mean the creative spirit in man which produces a picture or a statue is common to the whole civilized world, independent of age, race and nationality; the statement may stand unchallenged.” ~ Alma Thomas, 1970